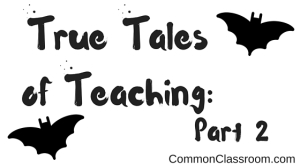 What is the most unexpected thing that has ever happened to you while you were teaching? I bet it had nothing to do with your students. My most unexpected moment of teaching came in an otherwise ordinary afternoon, but I never would have suspected the danger that lurked just over my head.

At the time, I taught freshmen and sophomore students at a beautiful high school in the middle of an otherwise deserted area. We have seen all manner of wildlife, from rabbits to hawks to barn owls, find their way onto our campus. Needless to say, the students are not the only creatures who have made their way inside the walls of my classroom.

It was a lovely spring afternoon, and I had just settled in with my sixth period freshman English class to read Act Three of “Romeo and Juliet.” Rome had just slain his new wife’s cousin, and things for the Montagues and the Capulets were going downhill fast. My students were on the edge of their seats, DYING to find out what happened next.

There was a sudden movement in the room. If you have ever taught a class of freshmen, you know that they can be squirrelly, but even this was out of the norm for my students. A subtle rustle began, a murmur like a gentle hum, and then a general movement. Something was amiss. The students knew what it was, but I was  clueless.

Frustrated by this interruption of the great Shakespeare, I demanded to know what was going on. “Ms. Flint!” The kids said excitedly, “There’s a bat on the floor.” They pointed to a small brownish object lying on the floor next to my storage cabinet.

I looked, and then I looked closer. “What is it?” I asked the kids. We gathered around it, giving it a respectable berth. “It’s a bat,” they chimed.

I looked it over again. It was small and looked unreal. For a moment, I wanted to believe one of my students had brought in a fake bat. “Did someone put this here?” I asked. “No,” said one brave soul,” It came though the ceiling.”

I looked up. I was in a second floor classroom, and it was true that I had heard scampering in the ceiling when the students were gone for the day, and I walked through the empty hallways. I had assumed it was birds, or even a squirrel. The thought of a bat had never entered my mind; but there it was, lying prone on the floor of my classroom.

There are things they teach you about in college: methodology, techniques, how to write a lesson plan, aligning your teaching with standards. But never had I been taught how to handle this.

“Is it dead?” a quivering voice asked. We stood staring, nobody answering, and nobody wanted to see for sure if the creature was actually alive. It was about that time that I remembered I was the only adult in the room. It was up to me to take decisive action, although I just really wanted to flee from my room.

A ruler, a puppy-emblazoned student folder, and a panicked phone call to the school custodian later, and the bat — which was not dead after all, only stunned — and the disruption was over. The bat was gone, the students returned to their desks, and the rest of the period was free for Romeo and Juliet. But really, after a bat falls through your ceiling, can Shakespeare really compete with that?